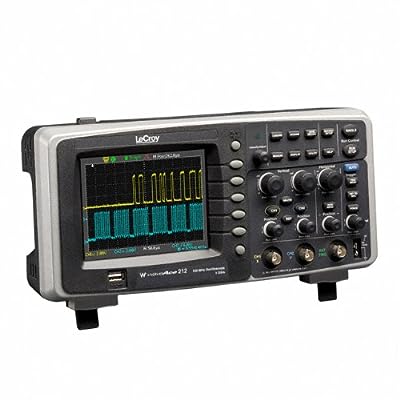 Price:
As of 2020-03-29 10:34:10 UTC (more info)
Product prices and availability are accurate as of 2020-03-29 10:34:10 UTC and are subject to change. Any price and availability information displayed on http://www.amazon.com/ at the time of purchase will apply to the purchase of this product.
Buy Now from Amazon
Find On eBay
Product Information (more info)
CERTAIN CONTENT THAT APPEARS ON THIS SITE COMES FROM AMAZON SERVICES LLC. THIS CONTENT IS PROVIDED 'AS IS' AND IS SUBJECT TO CHANGE OR REMOVAL AT ANY TIME.

The LeCroy WaveAce 200 series is a two-channel, portable digital oscilloscope with a maximum real-time sample rate of 1GS/s per channel, a record length of 9 kpts per channel (18 kpts interleaved), advanced triggering, four basic math functions and FFT, 32 measurement parameters, an internal memory for data storage, and USB connectivity for electronics applications such as such as product design, assembly lines, repair and servicing, and electrical engineering, among others. The high sample rate and deep memory enable long capture times for displaying detailed waveforms. In addition to an edge trigger, the unit has pulse width, video, and slope triggers for isolating a specific signal as well as an alternate trigger for simultaneous observation of two unrelated signals. Four basic math functions—add, subtract, divide, and multiply—plus FFT (fast fourier transform) and 32 measurement parameters such as averaging, frequency, and peak detection allow an in-depth analysis of waveforms. To aid debugging, the oscilloscope features a waveform sequence recorder that can capture and replay a sequence of up to 2,500 waveforms and its pass/fail mask testing promptly indicates problems. Low-pass, high-pass, band-pass, and band-stop filters allow isolation of specific frequencies and the zoom function magnifies details of waveforms. Up to 20 waveforms, two reference waveforms, and 20 setups can be stored in the internal memory of the oscilloscope. Additional specifications include a rise time of 5.8ns for the 60MHz model, 3.5ns for the 100MHz model, 1.75ns for the 200MHz model, and 1.2ns for the 300MHz, and various triggering features. The oscilloscope has a 5.7" color TFT (thin film transistor) LCD with a resolution of 320 x 240 pixels that can simultaneously show up to five waveforms.

The oscilloscope has an RS-232 serial port for connecting to a PC, a USB host port for connecting a flash drive (sold separately) to store data, and a USB device port for connecting to a printer for direct printing of data or to a PC for storing data and for remote operation via the included EasyScope software. The software is compatible with Microsoft Windows with support for 32 and 64 bits. The unit meets European Standard (EN) 61010-1, Underwriters Laboratories (UL) 61010-1, and Canadian Standards Association (CSA) C22.2 61010-1-04 safety standards. Its mains supply connector is rated for CAT (category) II installations to 300V, which covers energy-consuming equipment connected to a fixed installation, including household, office, and laboratory appliances, and its measuring terminals are rated for CAT I installations, which covers most protected electronic equipment, such as small household appliances. It has European Conformity (CE) marking. It comes with two passive voltage probes, a USB cable, EasyScope PC software, a certificate of calibration, a power cord for 100 to 240VAC, 50/60/400Hz, and a user manual.

Oscilloscopes are electrical testing devices used to verify the functionality of equipment that generates an electrical signal. Oscilloscopes measure the voltage of an electrical signal over time, and display the measurement as a waveform in a visual graph. The waveform shows the sweeps (or refresh) of voltage on a vertical (Y) axis, and the time on a horizontal (X) axis. Details of a waveform demonstrate the signal over time. Most oscilloscopes have two or four channels for inputting a signal. Some digital oscilloscopes offer more than four channels, allowing channels to be dedicated to specific signals and applications. Bandwidth is the maximum frequency of a signal that an oscilloscope can capture. A constant image will display if a signal is shown at a high frequency. Oscilloscopes may be analog, digital, or mixed signal. An analog oscilloscope directly displays an input signal as a continuous waveform, typically in a luminous phosphor on a cathode ray tube (CRT). A digital oscilloscope converts the input signal into a digital format and reassembles the waveform for display, typically on an LCD. A mixed signal oscilloscope (MSO) displays both analog and digital formats. Some oscilloscopes can display more than one channel and type of measurement simultaneously. Some oscilloscopes can capture waveform signals to memory, and recall them. They may provide real-time intensity grading, and may have the ability to adjust frequency of display. Oscilloscopes can be powered with batteries or electricity, or may have a built-in generator. They are commonly used for testing, measuring, and inspecting in science, engineering, telecommunications, automotive, and electronics applications.

Teledyne LeCroy manufactures test and measurement equipment such as oscilloscopes, protocol and logic analyzers, and signal testers. The company, founded in 1964, is headquartered in Chestnut Ridge, NY.

What's in the Box? 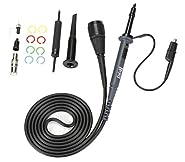 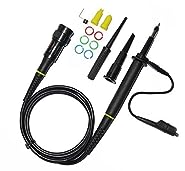